↓ Skip to Main Content
Home › Uncategorized › Did I mention that “With Two Hands” has been translated into Swahili?

Did I mention that “With Two Hands” has been translated into Swahili? 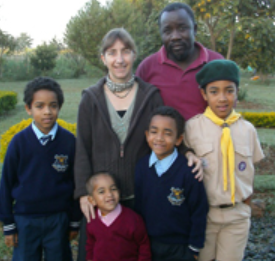 Almost a year ago I received a letter from a German missionary in Kenya who is raising her four boys there with her Kenyan husband while they train future missionaries. She had read With Two Hands, the first Hidden Heroes book, and was asking permission to translate it into the native language. This is part of her letter, edited for clarity:

What I especially like is the fact, that not the white missionaries are the focus of your books, but the Africans themselves. Therefore I truly believe that this book will have a big impact on African people’s lives, because it shows that with whatever you have and whoever you are – you are not too small to be used by our living God.

One of our focuses in ministry is to create mission awareness in churches. Therefore I think your book will help us to reach the ones who might like to do something for God, but think that mission is for the white man only (a big stronghold in African thinking). And I believe that the books will have a great impact in the lives of those who speak both English AND Swahili, which is understood in Kenya, Tanzania, Uganda, Rwanda, Burundi, partly in Southern Sudan and Somalia.

I am looking forward to hearing and reading more from you. May God bless you as you continue to serve Him.

A month or so ago I received word that the translation was complete.

I’d like just a bit to leave you thinking that With Two Hands had traveled to a German missionary in Kenya simply by word of mouth and popularity, but that wasn’t the case. A young friend of mine, who had gone to South Sudan as a missionary, and who herself married a Kenyan missionary, had given her some of the Hidden Heroes books to read to her boys. 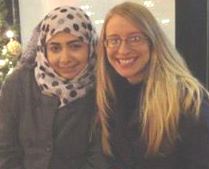 And how did I meet that young friend, Darah? It was when she went to our pastor asking him if he could introduce her to someone who had connections with Middle Easterners here in Greenville, South Carolina. He said, “Rebecca Davis.” He knew we hosted some Saudi Arabian students in our home and had connections with many other Middle Easterners through the English language schools. (I don’t think he knew that we had hosted an Iranian couple in our home, Muslim Background Believers who had come to Christ through the witness of Korean missionaries. I tell you, the face of missions is changing!) 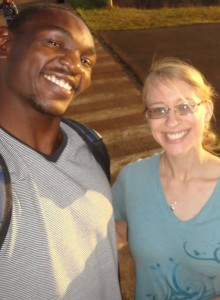 Though Darah had been in Iraq and wanted to get to know Middle Easterners, her heart even then was in South Sudan. Now she and her Kenyan husband Mark are studying at the Evangelical Institute of Biblical Training, a wonderful Bible school here in Greenville that emphasizes the life of prayer and walking with God while learning the Bible, but next year they’re heading back to Kenya, and hopefully to South Sudan to resume their mission work.

I’m super excited that the Swahili version of one Hidden Heroes book will be there for them to use when they return, so that their people can read about these mighty works of God in their own heart language.

One comment on “Did I mention that “With Two Hands” has been translated into Swahili?”