Did you see that video showing the Kimyal tribe receiving the New Testament in their language? If you didn’t, take a moment to allow yourself this amazing treat. There are several versions available, one of them up to half an hour, but here’s one of the shorter ones.

When my husband Tim first showed this to me, one of my first thoughts was Who ARE these people? Why are all of them already so excited to be receiving the Word of God? 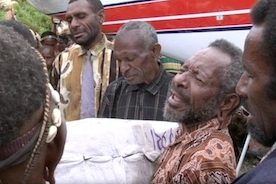 The man who prayed when he received the box of Bibles, the one named Siud—he came to Christ in the early to mid 1960s. Years earlier, when he was little more than a child, something had stirred in his heart to tell him that his tribe’s way of life of spirit appeasement couldn’t possibly be all there was. When the first missionary came (a man who was later martyred), Siud’s heart was prepared to receive the Great Salvation through Jesus.

And so, when as an old man he finally received it, his heart overflowed with joy and thanksgiving. This will be the last chapter in my newest Hidden Heroes book, Witness Men: True Stories of God at Work in Papua, Indonesia.

Thank You, God, for your Holy Word. May we never take it for granted. May we always hold it up as our Treasure, as these, our brothers and sisters, have done.