Charles Dickens loved England. Because of this love, he felt a deep sense of urgency to help his homeland change in important ways. He wanted people to care about the poor, to care about orphans, and to arise from their complacency.

Nicholas Nickleby stood up to the tyrant schoolmaster who was brutalizing the boys in his care.

But unlike the shrill writers and speakers of his day whose messages have sunk into oblivion, Charles Dickens knew the power of a good story. He knew that if he didn’t write a story that people would want to read, and to tell their friends to read, and to give to their children to read, the message would be lost. And so, he wrote about Oliver Twist, the indomitable spirit who persevered in the face of tremendous odds. And Nicholas Nickleby, who stood up to tyrants. And Sydney Carton, who gave his life to madmen for the sake of love. And of course, Ebenezer Scrooge, whose life was changed by realizing that there was so much more to living than amassing wealth. No matter how bleak the circumstances throughout his books, Charles Dickens wrote about triumph. Through this, he did his part to change his country. 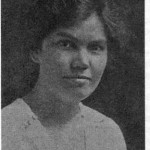 Margaret Nicholl Laird became one of the first missionaries to the Central African Republic, and the first to take the gospel to a tribe of cannibals there.

A common response to reading or hearing about the new line of books I’m working on, about little-known missionaries, is, “There just aren’t enough missionary books these days.” Whatever the reason may be, I share a goal with Charles Dickens. My audience is younger, my style is simpler, but I want to do my small part to write—though about the power of God rather than the power of the human spirit— to bring about change.

As Charles Dickens loved England, I love the Church. And so, because I want people to care, and to pray, and to go, I want to tell a good story. I want to write so that children will say, “Please read one more!” I want to write so that families will spontaneously talk about the stories the next day. I want to write so that parents who are reading aloud will pause to wonder over the sacrifice made by people who are, in essence, no different from themselves, ordinary people who will rely not on the power of the human spirit, but on the power of God, to effect the most important changes in the world—the changes that bring a soul from the kingdom of darkness to the kingdom of the risen Son of God.

I want to write about triumph. It’s one way I can do my small part to change the world.