Sample chapter from Living Water in the Desert (Hidden Heroes #6) 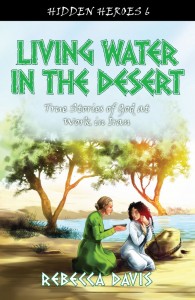 The Mysterious Book (Mina, part one)

What’s that? seventeen-year-old Mina thought to herself as she picked up the book off the library floor. Hmmm. It’s not a library book.

“I’ve heard of this,” she said to herself. “I think it’s the holy book of the Christians. And it’s in our language. I had no idea there were any copies of that book in Persian. I thought it was only in French and English.”

It was the mid-1980s. The Iranian Revolution had happened just a few years earlier. The country of Iran had changed so completely, with great violence and fear and oppressive laws, that almost all Bibles had been destroyed. Mina had never even seen a New Testament, or even heard that it had been translated into Persian over 150 years earlier.

Immediately Mina took the book to the librarian. “Did someone lose this book?” she asked.

The librarian took the book and turned it front and back, examining it. “No one has reported losing a book like this one,” she answered. “Take it with you. You can read it and study it at home.”

Read it and study it at home? Mina thought. What an odd thing to say! She stuffed the book in her backpack, curious to learn more.

That evening Mina arrived home to find her family sitting around the front room reading, as usual. “Look!” She held up the book for her parents and sister and brother-in-law to see. “I found this in the library, and the librarian said I could keep it! It’s a holy book!”

To Mina’s surprise, her father jumped from his chair and grabbed her arm. At the same time, her brother-in-law grabbed the book. “It’s the Christian Bible in Persian!” he cried.

Mina could see the anger in her father’s face. “Where did you get that?” he asked.

The girl’s own face flushed red with embarrassment and self-defense. “I told you! I found it in the library, and the librarian said I could keep it. It’s not a bad book, is it?”

Father’s face still showed great anger. “We respect that book, but it is not our holy book. Our holy book is the Koran. You don’t need another holy book. Take it back to the library—don’t make me take it back myself! Never touch books like that again. Do you understand?”

Mina trembled with embarrassment and fear and confusion. She felt humiliated for being rebuked in front of all the family. Her father was usually so kind—she had never seen him act this way.

The silence lay heavy and thick in the room. Mina’s mother shifted in her chair uncomfortably. No, I don’t understand! Mina’s heart shouted loudly. But in her fear she murmured, “Yes.”

Finally the younger brother broke the silence. “Father, why are you so angry?” he asked. “Why is it wrong just to find out what other people believe?”

“No daughter of mine will ever read a Bible!” Father sputtered. “Everything you need, you can find in the Koran.” He glared at Mina.

Mina’s brother-in-law added, “You must be strong, Mina, to resist the temptations to look at anything that might lead you away from your noble Islamic faith.”

What’s wrong with everyone? Mina thought desperately. What could possibly be so bad about this book? “I’ll do as you say,” she whispered. In tears, she ran off to her room and closed the door.

Late at night, Mina’s mother came to the door and peeked in. “Daughter,” she whispered, “don’t forget your promise to take the book back.”

Mina’s face was red with weeping, and she was still shaking. But she looked up and said, “Mother, wouldn’t you like to read that book?”

Mother gently repeated the words Father had said earlier. “Everything we need we can find in the Koran.” She closed the door.

What can be so terrible about a holy book that my parents respect? Mina struggled within herself. Would she obey and return the book to the library as she had been told to do? Or would she disobey and rebel?

Slowly, with her lips set in a thin line, she pulled out a flashlight from her drawer, opened the Injil, and began to read.

Early the next morning when Mother called her for breakfast, Mina awoke with a panic. The flashlight was still on! She had fallen asleep reading the Injil! Where was it? Her heart raced as she saw that it had fallen off her bed and lay in the middle of the floor in her room. What if someone had come in? What would have happened to her?

Quickly she stuffed the New Testament between her mattresses and hurried to breakfast.

Over the next two nights, under the covers with the flashlight, Mina read the entire New Testament.

“And I can read it in my own language,” Mina murmured. “It always made me mad that I had to learn a different language to read the Koran and to say my prayers.” She remembered the questions of her youth that had frustrated her father. “Why can’t Allah understand our own language? Why does Allah have to have everything in Arabic? Is Allah a racist?”

But there were still so many questions. What did Jesus mean when He said He would give rest to those who are burdened? Was He talking about the burdens of religion?

If there’s an Injil in Persian, then that means there must be some Christians in my country, Mina thought. I need to meet them. I need to understand this better. I’m still a Muslim, of course, because that’s my life, but I want to understand the Injil better. I want to know more about this prophet Jesus.

Mina continued her prayers to Allah just as she always did. She spread her prayer rug and bowed down again and again, kneeling toward Mecca. But for years now she had felt as if Allah was not hearing her prayers.

“God, do you hear me?” she cried one day. “I’m stuck with no freedom to choose my own way. I’ve tried so hard through the years to please you, but I’m exhausted.  Please, if you care about me, show me.”

That night, Mina had a dream.

She wandered alone in a twilight-misty desert, dying of thirst. Suddenly a voice, seeming to be from nowhere, cried out, “I am the way, the truth, and the life! No one comes to the Father except through me!”

Mina sat up with a shock, suddenly awake. Who was that voice? “I have to find a follower of Jesus to explain things to me!” she cried out. “But how?”

Not long after, some relatives came to visit. One of them was Monir, ten years older than Mina, and like a big sister to her. Mina loved talking with Monir, but this time when they went into Mina’s room together, Mina gasped. She had forgotten and left the Bible out on the table! She glanced over with fear in her eyes. What would Monir say? Monir’s family were even stricter Muslims than her own!

But to Mina’s surprise, her cousin almost ran to the Bible and hugged it to herself. “Mina!” she whispered. “Do you read this book?”

Mina felt as if she were in a dream. Monir knew about the Injil? She told her cousin the whole story, including the voice she heard in the night and her desire to find a follower of Jesus.

“I am a follower of Jesus!” Monir exclaimed. “I have been for several years, ever since I studied at the University of Mashhad. That was where I was invited to a special meeting of Christians. I knew what those young people had was real. I asked Jesus right there, at that first meeting, to change my life too, and He has!” Her face glowed with joy. “I still wear all these things—” she pointed to all the cloths that covered her head and hair and face and body “—but in my heart I’m not a Muslim. I’m a Christian. Listen, Mina, keep asking Jesus to show Himself to you, and He will. Because He is alive! Hallelujah!”

Mina’s head was spinning as the two young women left their bedroom to rejoin the family. She could hardly begin to grasp the huge secret they now shared.