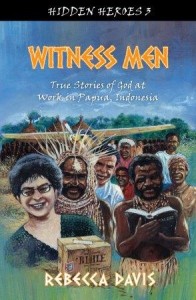 The teenage boys of the Dani tribe in the Pyramid Valley jumped and shouted outside the missionary’s house with such energy that their long black hair bounced on their backs. “Tuan! Tuan!”

The sun was just beginning to peek over the horizon.

Tuan , you must hear!  In another village, near us, a man has come who can’t see. He is very short. The gun shot him many years ago. It went right through him, but he’s still alive!” The boys kept interrupting each other and shouting past each other.

“Long times past, this blind man went away, but now he has come back! The river waters stop and let him go by on dry ground!”

“Who is it?” one of the missionaries asked. “Where did you get this story?”

“Didn’t you hear about him?” one boy insisted. “If he dies, his family won’t burn him. They’ll just throw him in the river. Then he’ll come back to life!”

All the boys sucked in their breaths, their eyes wide.

“And then we’ll be able to see the spirits of the dead, Tuan!” another boy added. “They’ll look like you!” The boys nearly trembled at the wonder of this amazing man. They all turned and began to run down the hill, and the missionaries followed.

From a distance they could see the crowd, thousands and thousands of people, still gathering, coming from villages all around. Everyone was chattering about the astonishing stories they had heard.

There was the man! But hmmm. It wasn’t one man; it was three. And none of them were blind.

“You boys got your stories a little mixed up,” one missionary said. “None of these men look like the man you were talking about.”

The boys smiled and shrugged and nudged their way into the crowd to listen. They didn’t care that stories could get twisted as they traveled from village to village.

“I am Jabonep,” said the main speaker. “I am from the Witness School in Ilaga. I want to give these people the gospel.”

“Well, I wish you success,” the missionary said. “I’ve been preaching it for years, but they don’t show any interest.”

More and more people gathered, jostling each other as they sat down in the center of the large village. The other two witness men and others with loud voices, stood here and there throughout the crowd.

And so the “echo preaching” began.

Jabonep lifted his hands to the sky and turned his face upward. “Greetings, our Maker, greetings!” he said.

The echo preachers near him copied his actions and his words. Then other men here and there throughout the crowd did the same. “Greetings, our Maker, greetings!”

Once the echo system started, it moved very quickly. Every line was echoed, echoed throughout the crowd, to make sure everyone could hear, even the ones farthest away.

“Today we are here! And the tuans are with us!”

“The tuans know about You and what You have done for us!”

“They have told these people about You, but the people have not listened!”

“So we have come to tell them about You and about Your words.”

“We have heard Your words, so we no longer follow the old bad ways.”

“You have given Your good Spirit to us, our Maker!”

“You are good, and You are enough, our Maker!”

“You have given Your knowledge to the tuan!”

“I am all done talking with You, our Maker!”

“Your eyes are the shining stars.”

Jabonep opened his eyes and looked at the people and began to preach.

“There was a blind man!” Through the thousands of people his preaching was echoed again and again.

“He could see nothing!”

“But there was a man—Jesus!”

“He had great power!”

“Jesus touched the eyes of the blind man . . . and he could see!” Jabonep popped his hands together and apart and then stopped, while everyone gasped.

The missionary looked around at the crowd, and saw that all of their eyes were as big as seashells. Especially those teenage boys who had come with him.

“That man Jesus was not a man like us!”

“That man Jesus was not a man like the tuan!”

“That man Jesus could walk on the water!”

Once again everyone in the crowd gasped.

“That man Jesus was the Son of the Great Maker!”

All eyes were riveted on the preachers.

“They killed that man Jesus! They put a spear right through him!”

“But that man Jesus came back to life! He lived forever!”

The whole crowd breathed in awe. Then they began whispering to each other in whispers that sounded like the wind rustling through dry leaves.

Jabonep waited. When he spoke again, he directed his hand at one person after another.

We’ve been telling them that for years, the missionaries thought, but they just laugh at us. They think we’re talking like crazy tuans. And they keep stealing our tools.

“You are turned toward the bad spirits!” Jabonep continued. “But that man Jesus can make you turn to the good Spirit!”

Suddenly Jabonep cried out, “Put your head down on your knees!”

As the missionaries watched in amazement, everyone did!

Jabonep again lifted his hands to the sky and turned his face upward.

“You look down at these people!”

“Give Your spirit to these people!”

“Give your words to these people!”

“You are great, O Great Maker!”

“Your arms stretch across the land.”

“I am all done talking with You now.”

When Jabonep finished, the people stood up, soberly, quietly. Some whispered, some didn’t speak at all. There was far too much to think about.

And Jabonep and his friends went on his way.

The next morning, several of the Pyramid Danis came to the missionaries.

There were some of his tools that had been missing for months. “Where did those come from?” one of the missionaries asked.

“Somebody took them, Tuan,” said a man earnestly. “But somebody brought them back.”

It looked like the gospel was making a difference.

“Why didn’t you listen to us all this time when we were preaching?” one tuan asked. “What did Jabonep do different?”

“Tuan, your words were foreign words. When we heard that witness man, we knew those words were from our own people. They were for us. So now we want to hear your words too.”

Through the days as the missionaries preached, more and more people came. “We heard the witness man! We want to hear more of the Jesus words!”

One day one of the mightiest leaders in the area came. “Jesus has repaired my heart!” he cried out. “I want you to teach my wives and my children!”

Another old man who had hated the missionary said, “I am a Christian now! I will go to heaven with you!”

Over six thousand people came to listen to the echo preaching.