↓ Skip to Main Content
Home › Sample chapter from “With Two Hands: Stories of God at Work in Ethiopia”

Sample chapter from “With Two Hands: Stories of God at Work in Ethiopia” 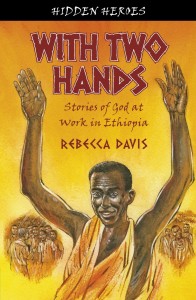 “Many tribes inhabit this country,” Mr. McLellan proclaimed. He looked out over the sea of dark faces, thousands of Ethiopian Christians come for the Bible Convention in Soddo. “They are all different from each other, like different nations. If you take the gospel to them, you will have to learn a new language

and customs, eat new foods, live in a different kind of house, learn a new way of life. Their dress and even their hairstyles will be strange to you. Some of them are very tall.”

A nervous laugh passed through the crowd. They knew that the fierce Bodi tribe towered a foot or more over most of them.

“If you take the gospel to these people, you will have to leave your familiar home and surroundings, even your family. You will have to travel over rough mountains. Some days you may go without food or shelter. The people that you try to reach with the gospel may falsely accuse you. You may be whipped, beaten, tortured, and killed.” Mr. McLellan gazed at the eager young men who lined the front rows of the meeting, sitting cross-legged on the ground.

“But they are living in darkness.” His eyes turned up to look out over the horizon. “They know nothing of the saving power of Jesus Christ, of the joy He gives, and the freedom from fear. We do know that. We have received His truth. We must tell them.”

Mr. McLellan’s voice began to tremble. “I am asking you to be missionaries to the people of your own country. If God is calling you to go, then you have no excuse to stay. Anyone who believes that God is calling you to give your life for the sake of the gospel, come forward.” He bowed his head to pray silently for the young men that God would call. Who would come? Who would give his life?

When Mr. McLellan looked up, his heart filled with joy. Twenty-four young men had come forward! “Oh, God,” he breathed, “strengthen each of these young men as they give their lives in Your service.” He looked at one face and then another, determined, serious, their eyes alive with the power of God. As the meeting ended, he came down to shake hands with each one.

But at the last volunteer, he stopped. Who was this? This was a young man leaning on a simple, homemade crutch, one useless leg dragging behind him, one pitiful arm dangling at his side. This young man couldn’t possibly go!

But the crippled young man must have seen the question in Mr. McLellan’s face. “My name is Fanta,” he said, looking directly at the preacher. Then he carefully turned himself to face a distant lake. “God has called me to go to the Oromo tribe along Lake Abaya.”

“Fanta,” Mr. McLellan answered, “do you realize that that tribe is one of the most savage tribes in the country? They’ll kill any outsider as soon as they see him! They killed a friend of ours.”

Fanta lifted his crutch and turned it so he could face Mr. McLellan again. His gaze did not waver. “The Lord has called me.”

“But . . but . . it will mean much walking, many kilometers over rough land. How can you do that?”

“Sir,” Fanta answered patiently. “You yourself said that if God has called me, I have no excuse to stay.”

By this time, many of the church elders and pastors and Bible teachers had gathered around too. They all sat down with Fanta to talk. All of them said the same thing. “Fanta, what are you thinking? It would take you many days to walk to that tribe! When they come at you to kill you, you wouldn’t be able to get away! You can’t go.”

“Listen, Fanta,” said Mr. McLellan. “You can have an important ministry right here at your home, a wonderful ministry, with much fruit. You can pray for the ones who go.”

With great difficulty Fanta lifted himself off the ground and balanced himself on his crutch. When he finally got his balance, he moved the crutch forward a few inches. Then he hopped to catch up with it. When he got his balance again, he did it again. In this way he slowly took the few steps necessary to walk to the edge of the group where he could see the lake more clearly. Mr. McLellan followed.

“Sir,” Fanta said. “Which of those young men has been called to the cattle herders by Lake Abaya?”

Mr. McLellan looked around at the other church leaders. None. None of the twenty-three other volunteers had said that Lake Abaya was the place God had called him.

“Sir,” Fanta said, turning laboriously back to Mr. McLellan once again. “Two years ago I told the elders that God had called me. But they said I needed to go to Bible school. So I did, and I completed the course. And now, sir, God’s word burns in my heart, and I must go. I know the Oromo people are the enemies of our people. I know that my life may be a sacrifice. But if I die, I will be with Jesus. But they . . . they are lost in darkness.” He looked up at the white man with pleading eyes. “Will you intercede with the elders for me? Will you pray for me?”

Mr. McLellan must have looked as if he were going to protest again, because Fanta took his crutch and, moving it bit by bit, laboriously hopped away.

A whole year went by before Mr. McLellan saw Fanta again. It was at the next District Conference. The white man got up to speak to the crowd gathered on the hillside, but he looked into the distance, toward Lake Abaya, and he turned pale. All eyes of the thousands of people turned to look too.

Over the hill, from the lake, came plodding, very slowly, more than two hundred tribal people. Singing. Women in bark skirts and cow skins, men in wild animal skins with rings in their noses, holding their arms high in praise to Jesus.

How had it happened? After the meeting Mr. McLellan found out. Fanta had left shortly after the last District Convention the year before. He had plodded slowly, one hop after another hop, taking five days to make the two-day trip.

“But when I arrived, I found out something that no one ever knew before.” Fanta’s face shone as he told the story. “Who knows why, something in their history they have forgotten, but this tribe—probably the only tribe in all of Ethiopia—this tribe honors cripples! Everyone else they kill, but cripples, ah, they are a special people.”

Mr. McLellan’s face burned as he heard the story that showed his own lack of faith.

“So they welcomed me! They protected me! And they listened to me as I told them the gospel. I could hop on my crutch from one village to the next, and out to the cattle camps. I told the story of the gospel over and over. The Lord greatly blessed His Word, and hundreds of people have believed. I have already started five churches!”

“Oh, Fanta, God forgive me,” Mr. McLellan whispered. “I did not believe! I thought you would die.”

Fanta laughed. “I know you did not believe me. But to me, whether I lived or died did not matter. I knew I had to go.”