↓ Skip to Main Content
Home › Sample chapter from “The Good News Must Go Out: Stories of God at Work in the Central African Republic”

Sample chapter from “The Good News Must Go Out: Stories of God at Work in the Central African Republic” 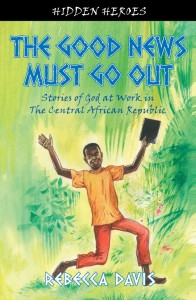 It just wasn’t the same Kongi. This bitter, angry young man couldn’t be the same person as the happy little goat boy who had given his life to Jesus, or the stalwart young disciple who went off to Bible school, determined to become a missionary.

But that was before the leprosy. Now in his late twenties, Kongi had lost five toes and could barely walk. The leprosy was beginning to spread over his whole body. Mama had biked to his village back and forth, back and forth, twenty miles each way, to give him injections twice a week, but they hadn’t helped. She had even brought him back to Ippy to care for him, but he was no better.

“Kongi,” Mama finally ventured one day, “the only leprosy colony in this whole area is back in Sibut, near your old home.”

“Are you telling me to leave?” Kongi sat in a ball, his knees hunched up to his chin.

“It isn’t that I want you to leave me,” Mama continued, almost helplessly. “It’s just that I can’t really give you what you need. The leprosy colony will have more medicine for you, and better medicine, and doctors who have been trained in just the right way to treat leprosy

“Oh, yes,” Kongi answered bitterly. “The missionary mama loves her little goat boy when he is well and strong, but when he—”

“Kongi!” Mama raised her voice. “Don’t talk like that!” Don’t you see what I’ve done for you because I love you now? she almost said. But she bit her tongue and turned her words to Jesus.

Grudgingly, Kongi packed his bag and climbed on the back of the next mail truck, headed for the leprosy colony at Sibut. As Mama stood and waved, he didn’t even look up.

“And please,” she added, “please give me an opportunity to go visit him there.”

Every day Mama prayed for her little goat boy, but many months passed before she was able to make the almost two-hundred-mile trip to visit the leprosy colony at Sibut.

Though Mama had seen many terrible sights in her days working as a nurse among the Africans, the deformities she saw all around her here made her feel overwhelmed. She tried not to stare at one misshapen body after another. “Oh, Lord Jesus,” she cried in her heart, “we can’t work miracles of healing the way You could when You walked the earth. But You are still the miracle-working God. Bring hope to these people who must feel as if they are past all hope.”

“What can I do for you?” A nurse in a white uniform greeted Mama.

“Uh, I’m looking for Kongi, a young man who came here from Ippy.”

“Oh, yes, Kongi,” answered the nurse. “We all know him. That is his hut.” The nurse pointed to a small building that people appeared to be streaming to from all directions. “We call it the social hub of the colony.” She chuckled and went on her way.

Mama could hardly believe her eyes—or her ears, either—as she approached. Loud laughter issued from the hut. More than one person laughing. And one of them, oh, she thought one of them sounded like Kongi. She hadn’t heard his laugh in so long.

“Mama!” he greeted her with a face wreathed in smiles. “It’s so good to see you! It is almost time for the afternoon meeting. Come meet my friends!”

Mama was introduced to first one and than another of Kongi’s friends, in various stages of the disease. Every pair of eyes, no matter how misshapen the face, shown forth joy. “Kongi, is this what you’ve done?” Mama asked in a whisper.

“Oh, Mama, you know you don’t say that!” Kongi laughed. “This is what God has done. You remember you told me that He may have a mighty work for me in the leprosy colony?”

“I remember you, Mama.” The voice came from below, near Mama’s feet. The missionary looked down to see a woman crawling toward her, so eaten up with leprosy that she barely looked like a person.

“Oh, Mama,” the woman cried. “Don’t look at me like that!” She turned her face upward more, and Mama saw that her eyes had the same glow she had seen in the others. “I thank God I have leprosy!”

“I will tell you my story,” the woman said. “Years ago, when you lived in Sibut, you came to my village on your bicycle and told us about God and sin and Jesus. But I spat on your shadow. I was such a beautiful girl that I thought I didn’t need your Jesus. I scorned your God. Other missionaries came, and I spat on their shadows too. Then I married the chief, so I became even more proud. But then the leprosy came and covered my hands and feet, and I was turned out of my village. No one wanted me. Not my husband. Not my parents. No one.

“The leprosy ate away my hands and my feet, and covered my beautiful face so that it became the ugliest face in the world. Then I came to this colony. I wanted to die.”

The woman had been smiling as she spoke these terrible words. But now her smile grew even bigger. “Then Kongi came. I complained to him, I told him my bitterness, but he said he understood, because he had felt it too. Then he told me about the One who cares even when no one else seems to care. Mama, this time my heart was open to Jesus Christ. This time I knew I needed the love of God. I could trust in myself no longer.” Her eyes filled with tears. “And he told me about you, Mama, the big white woman on the bicycle. Without a doubt I remembered you.”

As Mama knelt down and drew close, the woman continued. “If God had never done this, I never would have learned about the love of Jesus. I know I will have a new body in heaven, but if I had kept my beautiful body on earth, I would never have listened to the gospel. So I thank God I have leprosy.”

“Mama!” Kongi called. “Will you speak at our meeting?”

With tears in her eyes, Mama spoke about the amazing love of God, the great hope of salvation, the overflowing joy of Jesus, and the assurance

of eternal life with Him. The lepers, none of them healed but all of them thankful, gazed at her with light in their deformed faces, murmuring agreement with every word.

When Mama finally left the hut, an African man in a white starched uniform came to greet her. “Are you Madame Laird?” he asked. “I have wanted so much to meet you!”

Mama nodded. How did he know? What other wonders could God have in store on this amazing day?

“I am a doctor here. And Madame, I want you to know that I received the very best training in Paris, and I was a brilliant student. So you can suppose how angry I was at being stationed at a leprosy colony! I thought of these people as nothing better than animals.” He chuckled.

He turned and walked with Mama as he continued talking. “One evening I saw that many people were gathering in that hut right there.” He pointed to Kongi’s hut. “I thought, oh no, they’re up to no good. So I looked in the window

and I saw one of them take out a little black book and start to read it. I thought ‘one of those tribal animals can read?’ But it was your Kongi. He was reading the Bible to those people. And then I listened to him talk, and Madame, I was astonished at the depth of his learning. I was raised in a church, but I had never heard that Jesus died for my sins. I began to realize that I was the animal!” Here he turned to look at her, pointing to himself. His great laugh came from deep down, but tears stood in his eyes. “I was the one who needed something, and Kongi was the one who could give it to me. Kongi showed me Jesus Christ, and I was gloriously saved. Almost everyone here counts it a privilege to live at this leprosy colony.”

“And look.” He reached into his pocket and pulled out a small black book. “Look at what he gave me. It is very, very special.”

Mama reached out to take the little New Testament. She opened it to the front and read, “To my dear boy Kongi, from Mama. 1924. Keep loving Jesus.”

God did heal Kongi of his leprosy. Though his scars remained, the leprosy left his body. He continued serving and preaching in that leprosy colony for twenty more years.