↓ Skip to Main Content
Home › Sample chapter from “Return of the White Book: True Stories of God at Work in Southeast Asia”

Sample chapter from “Return of the White Book: True Stories of God at Work in Southeast Asia”

Keeper of the Stories 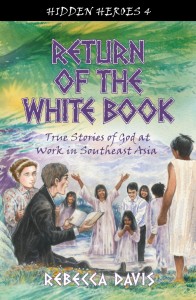 In the land of Burma, the Burmans ruled. With their education and their fine clothes and their grand books, they controlled the land.

All the tribes in the hill country lived in fear of the Burmans, fear of capture and slavery. One of the hill tribes, the Karens, kept moving from place to place as their only hope of safety.

Every place they moved, they carried their ancient stories with them. Stories of despair. Stories of hope.

One night, around a small campfire, an old man sat cross legged, his eyes darting from one face to another. A teenage boy named Thabew hurried to sit next to his uncle. The dark-skinned people, young and old, long black hair flowing, jostled for position around the flames.

Parents, children, young people, all gazed at the old man in awe. He was the Keeper of the Stories, and the Stories must be passed on. His high, clear voice began.

After Yuwah made Thanai and Ew, He put them in a garden. It was more beautiful than any garden of our world. It was full of bananas, lychees, pomelos, durians, and pomegranates.

Then Yuwah said to them, “I have given you this beautiful garden. You will tend it. I will visit you here, and walk and talk with you. Pray to Me each day.”

Yuwah said, “Seven kinds of fruit I have put in this garden. Eat freely of all of them. Except one. If you eat of that one,” Yuwah said, “you will die.”

Mukawli said to the man and woman, “Why are you here? What do you eat?”

Thanai and Ew said, “Our Father Yuwah put us here. We eat all the delicious fruit He has given us. We want for nothing.”

But Mukawli wished to trap them. He said, “Let me see your fruit.”

Thanai and Ew showed Mukawli everything. They described the color and texture and juiciness of the durian and the banana and the pomelo.

But then they came to the forbidden tree. They said, “We know not about this fruit, because our Father Yuwah has told us we must not eat it, or we will die.”

Mukawli said, “O my children, your Father Yuwah does not love you. He doesn’t want you to have the richest and sweetest fruit of all. He wants to keep it from you because then you will have powers like Him! You will be able to fly up to heaven or go down into the depths of the earth!”

Thanai and Ew received Mukawli’s words with open ears. Then Mukawli said, “O my children, my heart is not like the heart of Yuwah. I love you and I want to see you prosper. I will always speak the truth to you. If you eat that fruit, you will prosper.”

Thanai answered Mukawli and said, “I will not eat, because Yuwah has forbidden it,” and he turned and walked away. But Ew stayed, to listen more. Mukawli spoke more fair words to her of the wonders of the life to come if Ew would but eat that magical fruit. “My daughter,” he said, “I seek to persuade you because I love you.”

Finally, Ew reached out her hand and took the fruit and ate it.

Not long after, Ew convinced Thanai to eat.  Then the woman cried, “My husband has eaten the fruit, O Mukawli!”

The next morning Yuwah came to visit, to walk, and to receive praises. But all was silent.

Yuwah said, “Thanai! Ew! You have eaten of the forbidden fruit!” The man and the woman came out and hung their heads in shame before Yuwah. They had no words.

“You have disobeyed my commands,” Yuwah said. “You will grow old. You will fall ill. You will die.” Then Yuwah went away forever.

Soon one of the children of the man and woman became ill. Thanai and Ew knew they could not reach Yuwah, because He had departed from them forever. So they went to Mukawli, because now he was their master.

“What shall we do for our sick child, Mukawli?” they asked.

Mukawli threw back his head and laughed. “You are my slaves!” he cried out. “Now you must offer sacrifices to my servants, the nats. They are the ones who cause sicknesses, and accidents too. They will control the weather and the seasons and the wild animals and war and life and death and everything that happens to you. If you want peace in your lives, you must offer sacrifices to the nats. Now, if you want to know what to do for anything, anything in your life, you must learn to read the bones of the jungle fowl and the dung of the pig. To make war, to marry, to plant, to travel. Do nothing without finding out what the nats command.  That is the only way to keep the nats from destroying you. That is the only way to peace.”

The old man’s last words lingered in the air.

Throughout the story, the listeners had been reacting with strong emotions. Fear at the mention of Mukawli. Anger at Ew’s betrayal. Hopelessness at their enslavement to Mukawli.

But the old man’s last words trembled before them like the shout of a mocking nat. Because there was never peace.

As young Thabew listened, he knew as well as the old man that nats could never be trusted any more than their master Mukawli. That’s why his people had to learn all those magic words and rituals.  That’s why he, Thabew, tried to scare the nats away by wearing a tiger’s tooth and a bear’s claw.

A hatred rose up inside him. He hated those nats. He hated Mukawli. He hated this slavery. And then he ducked his head. His eyes darted here and there, fearful lest the nats discover his unformed thoughts.

The boy raised his eyes to the countless stars glittering in the blackness. That’s where Yuwah had gone—somewhere beyond those stars.

“Yuwah is lost to us!” The old man cried out, raising his arms in despair.

“Not forever, grandfather,” a younger man answered respectfully. “The pale brother will come.”

“Yes, someday.” The old man nodded, clinging to their only hope. “The pale brother will come to the Karen nation, with the white book. He will show us the way back to Yuwah. Someday.”

The small circle of listeners gazed into the dying embers. They despaired.