↓ Skip to Main Content
Home › Sample Chapter from “Lights in a Dark Place: True Stories of God at Work in Colombia”

Sample Chapter from “Lights in a Dark Place: True Stories of God at Work in Colombia”

Victor and the Dream Hut 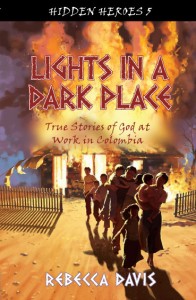 “Victor, Victor!” the voice called. “The people in that hut are dying without Christ! No one has ever told them!”

Victor Landero sat up in bed. What kind of strange dream was that? He closed his eyes and saw the hut again, as clearly as if he stood there. He saw the thatched roof

, the simple wooden fence, the gate. There it was.

He lay back down in bed and tried to sleep. “I’m working for you, Lord. I tell many people about You,” he murmured as he drifted off.

There was the hut again. “Victor, Victor!” the voice called. “The people in that hut are dying without Christ! No one has ever told them!”

This time when Victor sat up, he felt a cold sweat all over his body. Why did he have that dream again? And anyway, how in the world could he find such a hut?

The gospel was spreading in the lowlands of Colombia in those days in the 1960s. Any time anyone came in to buy anything in Victor’s small store, he talked to them about Jesus. Then there were enough believers to make an entire congregation, to gather together for worship every week. Victor and his family moved to another area and began to tell other people who had never heard. Persecution against the evangélicos had died down, and people were willing to listen to this amazing story of the True and Living Way.

For days and then weeks and then months, Victor tried to push the dream out of his mind. But still he heard that voice, “The people in that hut are dying without Christ! No one has ever told them!”

Finally one day Victor said to his wife, “I have to go find that hut in my dream.”

“But your daughter is sick, Victor,” his wife said. “What if she dies?”

Victor thought long and hard about that one. “If she dies,” he said, “she’ll be in the arms of Jesus, because she has trusted in Him. But there’s someone out there, in a hut with a thatched roof, who has never heard about Jesus. Can you trust Jesus for her protection with me?”  Slowly his wife nodded.

Victor knelt beside the bed of his little girl and prayed with her. The next morning he prayed with her again, kissed her good-bye, hugged and kissed his wife, and started off.

“O my loving Shepherd,” Victor prayed. “I have no idea where I’m going. Will You lead me as You did Abraham?” He began to walk.

For a whole day Victor walked. “Am I going the right way, Lord?” he murmured. He settled down to sleep for the night.

The next day he began to walk again. “I trust You to lead me,” he whispered as he made his way through the dark woods.

A small hut in the clearing at the edge of the woods. The thatched roof, the simple wooden fence, the gate. All of it was there, exactly like in his dream.

“You’ve brought me here,” Victor murmured. “Surely You have prepared the way.” He walked up to the hut and knocked on the door.

A woman opened it. “Yes?” She knit her brow in surprise to see a strange man before her.

“My name is Victor Landero. I would like your permission to invite your neighbors to a meeting here tonight. I want to tell everyone around here about the good news of the evangelio of Jesus Christ, the gospel.” What would she think?

The woman’s eyes opened wide, and she began to tremble. Did she feel fear? Shock? Horror?

“I don’t mean to trouble you,” Victor faltered, “but in a dream, I saw a hut exactly like this one. God told me I had to bring the evangelio to the people here. Then He led me to you.”

The woman nodded slowly without a word, as if she were in a trance. She slowly opened the door wide to let Victor come in and sit in the only chair.

After resting for a bit, Victor spent the afternoon knocking on the doors in the surrounding area, inviting people to come hear about the evangelio. That night twenty-four people gathered in the woman’s tiny hut to listen to Victor’s words, all of them wide-eyed and wondering to hear this good news from God.

Quietly, carefully, Victor explained the true gospel of Jesus Christ from the New Testament, the gospel of the love of the heavenly Father for vile unworthy sinners, His great salvation of sinners from hell, through faith alone in Christ alone. “Would anyone here like to put all faith and trust in Jesus Christ alone?” Victor finally asked.

Every hand went up.

Surely they don’t understand, Victor thought. He began again to tell the whole story, emphasizing the new life in Christ, the life that no longer lives for self but lives for God and others.

“Now, how many of you would like to put all your faith and trust in Jesus Christ alone, and have a transformed life?” he finally asked again.

Every hand went up. Several voices broke the silence. “We understood you the first time,” they said.

So Victor led them all in prayer to trust in Jesus Christ. “I’d like to meet with you here again tomorrow night,” he added.

After the people had gone back to their homes, the woman spoke to Victor again, her voice trembling. “You said that you had a dream. Three nights ago . . . I had a dream as well. I dreamed that my house was full of people. Full, so full there was no room for any more.” She waved her arm as Victor looked around the now-empty one-room hut. She went on. “I dreamed that a strange man, a man I’d never seen before, stood there with a book. He used this word again and again, evangelio. It was a word I’d never heard before. He taught us to sing songs about this evangelio.” She gazed at him with fear and wonder in her eyes. “And now, you’re here.”

“Then the true God prepared you too.” Victor thought soberly about the timing of her dream. It was the night before he determined that he would go. “Even before I told you about this evangelio, you already knew that was from God.”

The next night all the people returned, bringing ten more with them. All ten of them also trusted in Christ.

Victor stayed three more days. He gave them a Bible to share, taught them gospel songs, prayed with them, and then returned to his home. He found that while he was gone, the gracious Healer and given health to his little girl. “Thank You, our loving Father,” he prayed with his family. “We knew she was safe in Your arms, whether she lived or died. But thank You that You have kept her here with us.”

A year later a missionary from the United States, David Howard, visited the group of Christians around the hut in the clearing. He found that all of the original believers were still there, and they had brought even more people to Christ, to make a congregation of about fifty fervent Christians. Every night they met to listen to the Bible, discuss it, and sing and pray together. Their lives had been truly transformed.

Victor taught many Christians to become evangelists in their own areas. As more and more went out, many believers were scattered throughout the countryside area, like bright candles in the darkness of Colombia.

When there were thousands of believers there, Victor left that area and began to work among the Empera Indians of Colombia, where there were no Christians. The work there was very difficult, with few converts. When David Howard later asked him about that very slow work, compared to the hundreds and thousands of Colombians he had seen come to Christ, Victor answered, “I know other people have labored long with little result. It doesn’t matter. I’ll stay here among these Indians for the rest of my life, because this is where God has called me.”