Sample chapter from “With Daring Faith: A Biography of Amy Carmichael” 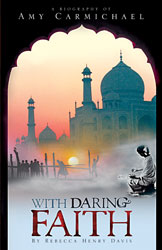 Little did Amy Carmichael know, but one ten-year-old girl in a remote Indian village was praying to know the truth.

Arulai had a mean temper. She would get angry at her friends and hit them, making them afraid to play with her. “Why does this happen?” Arulai asked over and over. “I want to be good, but my temper takes over my whole body.” She begged her father to tell her. “Is Siva the greatest god? I rub his ashes on my forehead every morning. But I have prayed to him again and again, and he has not changed my temper.”

“Child, I know of no god that can make a bad disposition into a good one,” Arulai’s father answered. “That is something you must do yourself.”

And yet Arulai felt sure that if she could only find the one God that is the greatest of all gods, He would be the one that could help her. Surely if there were a God that was all-powerful, then He could do that. One more time she tried. “O heavenly Siva,” she cried, “Hear me, I pray, and change my disposition! Help the other children to love me! Hear me, Siva! Hear me!”

When Siva did not answer, she tried praying to Brahma, to Vishnu, and even to other lesser gods, hoping that someone had made a mistake and that one of them really was the greatest. But it became obvious to her that none of them were. Her temper didn’t change a bit.

“What good does it do to pray to any god,” she finally asked herself, “if he is not the greatest God of all? I want to worship Him. But alas! I do not know who He is!” And the girl ran into a field where she threw herself on the ground and cried, “O greatest of all the gods, hear me, even though I do not know who You are! Hear me, I pray, and show Yourself to me!”

But no answer came. Finally she rose, brushed herself off, and went home, sighing heavily with sadness.

A great blow came to Arulai when her baby brother, whom she had cared for and loved dearly, died suddenly. “Where is he now?” she begged of her mother. “I want to be able to picture him somewhere.”

“All I know, child,” her mother answered wearily, “is that he is in the land of the spirits of the dead.”

Arulai clinched her eyes shut and tried to imagine her little brother in that dismal land, floating around among all those other spirits of the dead, not knowing anyone, crying for his beloved sister. The God of gods was great, she was sure. But was He really good, to do such a thing to a little baby boy?

Still, something inside her pulled at her heart to try to find that greatest God. She planned special places and times to pray to Him, even though she still did not know His name.

One day as Arulai set out to the well to draw water, she didn’t happen to be thinking about God. She was just thinking about getting the water and getting home on time. But there, near the well, she saw an Indian man and some foreigners, with a few people gathered around them. Arulai glanced at them out of curiosity—she had never seen foreigners before. She was moving in the direction of home, though, when these words that the Indian man spoke burned their way into her heart: “There is a living God! There is a living God! I was a lion, and He turned me into a lamb!”

Arulai stopped short. That was it! That was what she had been waiting months and months to hear! If only she had time to stay and find out the name of this living God—but she had to hurry home or face a beating from her mother.

Why, if there was one living God, that meant that Siva was a dead god. She determined not to rub his ashes on her forehead anymore.

That night Arulai lay wide awake thinking of the living God and praying to Him. She prayed especially that He would send those foreigners to her village again so that she could find out about Him.

And the next day they were there again, around the well, preaching and talking. Arulai only glanced at the Indian women in the group. But she stopped and studied the foreigners. There were three of them—an older couple, and one younger ammal, or woman, wearing a sari. “The older couple looks as if they must be married,” Arulai mused. “But I don’t see how they could be when they seem to be so devoted to their God. Maybe they were married before they came to know this God, so they were not able to separate themselves from each other. They must be embarrassed by it.

“I don’t understand, either, how they could seem so happy. People who are devoted to a god are always sad. But anyway, I think I like the looks of that younger ammal. She is wearing a sari; so I think I will go to her. She can explain all about the living God to me and then I can worship Him. . . .”

It suddenly occurred to Arulai that her family would not like for her to be worshiping a god other than Siva, even though he was dead. That meant that if she were to worship the living God, she would have great difficulties. “But I know,” she whispered to herself confidently, “that someday the living God will bring me to this ammal in the sari, and I will be her daughter, and when I learn all about Him, I will go around as she does now and tell others about Him.”

Although she wasn’t able to talk to the foreign woman in the sari yet, Arulai listened closely to the words that these people spoke about the living God. She went to the meeting that they had later, where several other children were gathered.

But on her way home, Arulai had doubts about the living God. Did He, after all, really exist? Or had her hopes imagined that He could be real? She decided on a test, to see if He really was alive. “I will ask Him three things,” she said. “If He grants me two of them I will believe that He is the living God.”

There on the doorstep she saw her mother standing with a broom in her hand, waiting to punish her. “Living God,” Arulai prayed, “my first request is that You keep my mother from punishing me!”

But Arulai’s mother grabbed her by the arm and swatted her again and again. “You have been listening to those low-caste people!” she cried. “You are a disgrace to our family! You must be punished for that!”

Arulai felt miserable. She didn’t mind the punishment half so much as she worried over the thought that the living God had not been able to answer her prayer.

But the next day she went to hear the foreigners again. Amidst the group of children she sat, eager to learn more about this new God. Suddenly she heard the question, “Has anyone been punished for coming to hear about Jesus Lord?” Arulai was embarrassed to answer, but another child, who knew of her trouble, pointed her out. “If you are punished,” the woman said, “call upon the name of Jesus Lord and look to Him in your heart, and He will give you strength to face the trouble.”

When Arulai left the meeting that day, she murmured the name Jesus Lord to herself over and over. Why, this was the name of the living God! She skipped along the path, so happy was she to know it at last. And as she skipped, she thought of her test. There was a tamarind tree, heavy with sweet fruit, but none was on the ground around it. The law in India said that you must not steal fruit from the tree, but if it falls to the ground, it is yours. So Arulai prayed, “Jesus Lord, living God, make the fruit fall at my feet.” Suddenly a pod fell.

The little Indian girl picked up the pod with a feeling of awe, sure that Jesus Lord had done this for her. Now there was only one more prayer. If He were to answer this one, she would be sure that He was indeed the greatest of all the gods.

As she neared her house, Arulai’s heart beat with fear. “Jesus Lord, do not let my mother punish me,” she prayed. “Show me that You are the living God.”

There was her mother at the doorstep, but she did not have the broom in her hand. All she said was, “Come in, child. I thought you were lost.”

That settled it. Jesus Lord was the living God, the greatest of all the gods.