Sample chapter from “Joy Ridderhof: Voice Catcher Around the World”

The Voice That Never Gets Tired 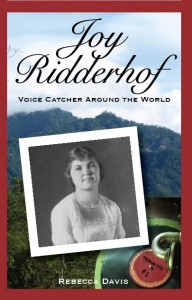 Joy sat and stared out the window.

Instead of seeing the little grass-roofed huts of Marcala, she saw skyscrapers.

Instead of hearing squawking chickens and barking dogs, she heard cars honking at each other.

She was back in Los Angeles again. How could it be?

For six years she had worked in Honduras. What a wonderful time it had been! How many people she had seen trust in Jesus and give their lives to Him in joyful service!

But now, in 1936, she had to return home. It hardly felt like home anymore.

She had no energy, she could barely even do anything. This awful disease would take months for her to recover from.

“Dear God,” she prayed. “I know I must rejoice in everything. I DO rejoice in this hard time. I know You’re going to do something great out of it. But it’s hard, Lord.” She sighed.

In her dreams and her daydreams Joy kept thinking about Marcala. Don Pedro and his strong prayers to the God who loved him. Juan with his quick smile and willing hands. How happy she had been to see him clip-clopping on his mule with his packs full of food in answer to their prayers! She thought about brave Cruzita, who had stood against men who had come to threaten them at the mission house.

Joy sighed again. She thought about an old woman in the mountains she had gone to visit. The woman couldn’t read, so Joy didn’t leave a Bible with her. Instead, Joy had tried to teach her some Bible verses, but the woman just became confused, and couldn’t learn them. “How can I rejoice about that, Lord?” Joy asked. Her sighs changed to deep trembling breaths. She thought she was going to cry.

In her dreams Joy heard those old phonographs playing those silly songs in the saloons.

The cockroach, the cockroach
Can’t walk anymore
Because he doesn’t have, because he’s lacking
His main walking leg.

And yet as she turned over in bed, the tune kept running through her mind.

If only there were records that played gospel songs in Spanish. She remembered that another missionary had said something about that.

“I guess I can learn to play the guitar even while I’m sick,” Joy said. “It will give me something to do, and then when I’m feeling better, I can make a gospel recording, and I can sing some songs for it.”

The idea began to grow in her heart. She wrote letters to friends. “Please pray with me about this,” she said. “I think the Lord may want me to make some Spanish gospel recordings.”

When some friends visited her, she told them about her idea. “But how will you make the recording?” someone asked. “You don’t even have any recording equipment.”

“I don’t know,” Joy admitted. “The equipment is big and very expensive, and I wouldn’t know how to use it even if I did have it! But the Lord knows all that, and I’m trusting Him.”

Joy’s days in bed began to seem brighter. “Let’s see,” she planned. “I’ll read some Bible verses in Spanish on the recording, and explain them, and then I’ll sing a cheery gospel song that the Christians in Honduras know. . . .  Lord, this is so exciting!”

Finally when Joy was feeling a little better, the time was right. Someone let her use his recording studio. Friends helped out. Joy made one simple recording. When she held the record in her hands, she felt a great thrill of accomplishment.

“This is so wonderful! I could actually do something for You while I have to be back home getting well! Thank You, Lord!”

Joy mailed out several copies of the recording. Some to Don Pedro in Marcala. Some to other missionary friends in Honduras.  in the capital of Honduras. And a few to other people.

“I want to do another one, Lord,” she murmured. “When I go back to Marcala, I hope I can have several different records to play, with different messages and different songs. I wonder how they’ll like the one I sent them?”

“They love the records!” the missionaries and other Christians wrote. “All the people love your records! Not just the Christians—everyone! They play them on the phonographs over and over! They’re memorizing the songs and the Bible verses!”

Every letter Joy got, from every missionary, all said the same thing. “The records are wonderful! They are a gift from God!”

She made another recording and then made copies of it and sent them off. And another. She asked Mexicans and other Spanish speakers in California to help her.

More letters came, from more missionaries who had heard the records and borrowed them. “The records keep giving the gospel message, long after we have to leave!” they wrote. “The records never get tired! They can keep preaching to the crowd, even when we need to speak to people one on one!”

Other missionaries from other Spanish-speaking countries wrote letters to her too. “We’ve heard about your Spanish gospel recordings,” they wrote. “We’d like to order some for our mission work.” Joy began sending records out not just to Honduras, but to many countries. There were three hundred million Spanish-speaking people in the world. That meant a lot of records!

Joy kept working faster and harder, making one recording after another, reading letters, sending out records to all the people who asked for them. She felt filled with energy and excitement.

“Hey!” she noticed one day. “I have just as much energy as when I first went to Marcala! That means I’m well! I can finally go back there, where I belong! Thank You, Lord!”